Jubilees on show at Spring Stampex 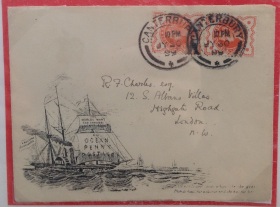 I’m lucky enough with my job as a philatelist with David Feldman SA that I get to go to Stampex twice a year. Not only do I get to meet fellow collectors, I even get to see some nice Jubilee material (although mostly on dealers’ stands). However this time at Spring Stampex was an exception. One of the best collections on display was David Turner’s Ocean Penny Postage Propaganda Envelopes collection. These were made to publicise the need for cheap communication with the United States, from the 1850s onwards until its eventual introduction in KEVII’s reign. Everyone I had seen previously was from the 1850s to the 1870s. So it was with great surprise that I spotted three covers with 1/2d vermilion frankings! Featured here are two examples from the collection. There was even a collection of QV controls on display, albeit without any stand out items.