January 2014 Retail Items of the Month

Well my new blog feature lasted exactly one month… If I fail again I will be less ambitious and do this every quarter. We’ll see… 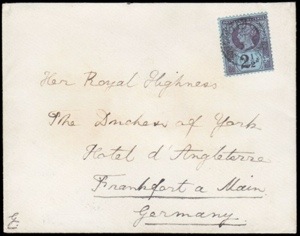 Anyway, I will recommence with this envelope sent from Prince George, Duke of York (future King George V) to his wife “Her Royal Highness The Duchess of York” in Germany and initialled at the lower left. Andrew Lajer is asking £350 which seems reasonable to me considering the desirability of Royalty philatelic items.

Next up is this attractive and scarce imperf. plate proof of the 3d purple on yellow. I think it’s a snip at £100. For sale by Elstree Stamps on eBay. 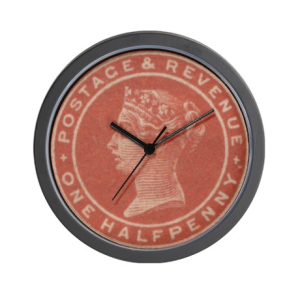 And now, the pièce de résistance of any Jubilee collector’s den: a clock with the 1/2d vermilion!!!! Currently on sale by cafepress.com for a bargain £14 plus postage. As I write this I’m looking at mine hanging proudly on the wall :-). They also have a huge range of printed t-shirts, hoodies, etc. for all stamp collectors.

We kick of this month with a block of four 1s green, but with a rather washed colour. it isn’t much of a looker. However the Kirkwall cds (which is the capital of the Orkney Islands in Scotland) was the main interest, as the faded colour did not prevent several bids pushing it to a final price of £75.62.

The next item was a cover sent to Australia from Glasgow with two 3d purple on yellow paying the 6d rate. However the cover was redirected to New Zealand and further franked with a Victoria 2d. With some foxing roughly opened at top, this scarce mixed franking still fetched £112.29 plus postage.

This attractive cover has the TPO cancel of the Edinburgh & Newcastle S. T. Day Mail, with the 1/2d vermilion paying a late fee. It sold for £37.78.

This envelope was sent using the London, Brighton and South Coast Railway company to Tunbridge Wells. Franked with the company’s 2d stamp and pair of 1/2d vermilions both tied by a blue crayon cross, the 1/2ds were tied on arrival. The prices these covers fetch is highly dependent on which Railway company stamp it was franked with, and this one sold for £78.00.

This innocuous looking cover was the undoubted star of the month if not the year so far. Bearing an 1887 2 172d purple on blue, it was sent by the future King George V on a Royal Household envelope with a superb seal from Balmoral addressed to the Duchess of York in a hotel in Germany, cancelled by the “Caledonian T.P.O. Night Up” cds. The cover bears the initial “G.” of Prince George and is addressed in his hand. I think this went cheap at £245 and regret not bidding on it. 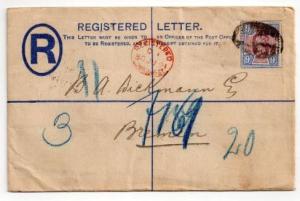 I have two rare frankings with the 9d purple and blue this month to show you. The first is a single franking, and the only one I have ever seen. It doesn’t appear to be philatelic, but I can’t make out what rate it is paying, but the crayon markings on the front obviously hold the clue. If someone could help me out it will be much appreciated! It sold for £109.92. 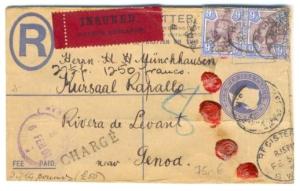 Then only a few days later, this pair on cover sent by the Insured rate fetched £138.00. With the manuscript indicating that the contents was £50, the franking pays 15d in insurance and registration (5d for the first £12, each further insured amount of £12 pounds cost 2 1/2d extra), plus the double the UPU letter rate. Both are very welcome additions to my collection! 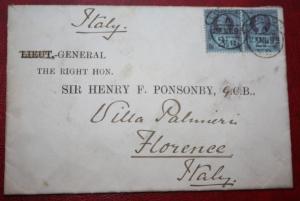 This cover definitely interested me, and I was planning to make a cheeky bid, but alas, I forgot about it and it was sold before I knew it…for £139.05! At first glance, it is just a pair of 2 1/2d paying the double letter rate to Italy. Nothing unusual there. But take a closer look at the image and you will notice that it is going to Sir Henry F. Ponsonby, who not only rose to the rank of Colonel in the Grenadier Gaurds and fought in Crimea, but also later became Keeper of the Privy Purse and Private Secretary to Queen Victoria!! Not only that, but the stamps are cancelled by the scarce Royal “V R” hooded cancel of London, with a Buckingham Palace wax seal of the reverse. Making this a wonderful item for the Royalty collector.