It was another disappointing month again for interesting Jubilees on eBay, but the sale of the Dr Peter Young FRPSL and Iain Stephenson FRPSL collections at Grosvenor on October 25th & 26th more than made up for it.

Dr Young’s collection spanned the surface printed issued from 1879 up to the Jubilees, which featured many die proofs, colour trials and settings. The sexiest item being lot 1578, a 10d colour item bearing two colour trials in combination with two 10ds in the issued colour with one of each cancelled by a “B01” numeral. Estimated at £10’000-12’000, unfortunately it failed to sell. As did a few of the other die proofs and striking book pieces.

One group of items I had never seen before and didn’t spot until after the sale because they put it in (my opinion) the wrong place in the catalogue, was lot 641: a 1d lilac, a 1/2d vermilion, 1 1/2d and 2s Jubilees with the value printed on the reverse under the gum in black. I had seen the 1/2d and 1d before but not the other two values. Supposedly one of only 3 sets know, it sold for £5’500 plus commission.

About 1’000 lots later where the rest of the Jubilees were, my most desired item was lot 1602, a 1s green & carmine die proof of the head which sold for an impressive £2’000 plus commission which was a shame (for me). But I managed to pick up a couple of 1/2d vermilion striking book pieces pretty cheaply. And further good news is that there are more items to come from his collection in Grosvenor’s next GB sale!

From the Professor Iain Stevenson collection, items of note included his collection of 4 1/2d Jubilee usages which looked like a steal at £2’300 plus hammer. One of the better results however was lot 360, a 4d Jubilee used in combination with a 2d South Eastern & Chatham Railway stamp which sold for £480 plus hammer.

However the highlight of the auction was lot 478, the 2d green and scarlet with the speckled engine-turned background on the duty tablet. This essay for the duty tablet was almost immediately rejected and most of the examples printed were destroyed, and was stated in the auction catalogue to be one of the rarest of all the Jubilee stamps. Catalogued at £12’500 by Stanley Gibbons, I wouldn’t be surprised if I saw this come up on their inventory in the near future. It sold for £6’000 plus 17% buyers premium.

My favourite item was probably lot 523, a very attractive advertising cover for Dalukola Tea which sold for £150 plus 17% commission 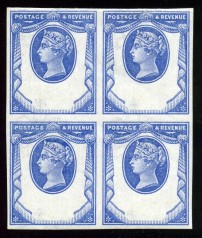 The star item of the month was this imperforate block of four essay for the Reply Paid stamp. A single of this essay is currently on eBay at a “Buy It Now” price of £295. So the vendor may well be disappointed that this item only fetched £320.50. More so as he stated in the description that he bought it as an investment for £500… 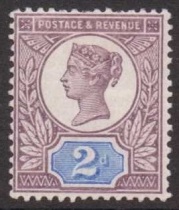 The second most valuable item of the month was this 2d colour trial in purple and blue. A few short perfs at the top and a corner crease saw this fetch one bid at the opening price of £99.99. Quality is everything. Normal retail is £600-700 for top quality. 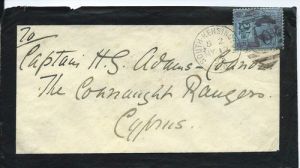 Destination of the month was this mourning cover to Cyprus, sent to a Captain in the Connaught Rangers (an Irish regiment in the British Army). The reverse with some minor backflap faults and a Politiko bs, it sold for £33.90, and is the first Jubilee cover I have recorded going to Cyprus.

This slightly creased cover with an uncommon franking to a common destination sold for an impressive £81.65. What got people so excited? The Dublin & Belfast Railway Post Office cds. 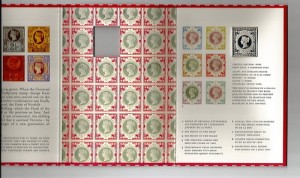 And finally a little novelty item to finish on; a silver ingot of the 1s green & carmine. The Royal Mail produced a series of these about 5 years ago which retailed at £25 each. Again not a very sound investment as it sold for only £10.64 (which has knocked off £15 from the value of my collection. Doh!). But not as bad a loss as the poor seller of the Reply Paid essay block…