There were several interesting items this month and, if I remember correctly, the following five were all from the same seller which is most unusual. It was even more of a coincidence that I had seen the seller post them in a Facebook group for Queen Victoria stamps only a few weeks ago.

First up is me bragging again (sorry) about my latest purchase. This attractive postcard is advertising a German-language newspaper in London and was sent to Germany with two 1900 ½d greens. One was abnormally placed in the lower left and obviously the postal clerk missed it with the canceller and so was cancelled only on arrival in Breslau. Cheap as chips at £29.85.

This large cover features an irregular block of five of the 6d purple on rose as well as two 1881 1d lilacs (how I wish it had been a 2d green & red instead), which are paying 12 times the UPU rate plus 2d registration fee; making an unusually high franking especially using a multiple of 6d.  It sold for £36. 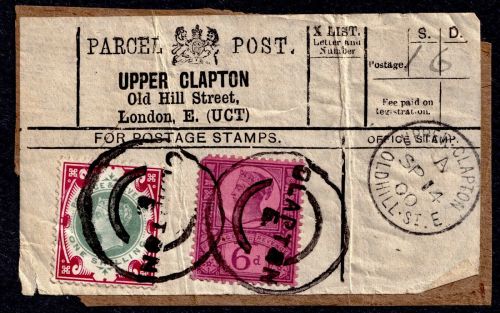 Regular readers will probably know how much I adore the 1s green and carmine. I was planning to bid on the attractive parcel label but at the time I was still sulking about my missing purchases from December. I have started a census of usages on parcel labels but I’ve not been as rigorous in tracking down items as my listing for the usages on cover, so currently I have 24 recorded. Even if I had been in the right frame of mind to bid, I wouldn’t have gone as high as the £181 it realised, although I think it’s worth it. 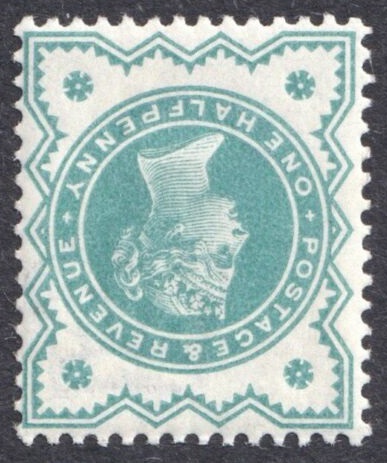 This is a stamp I still don’t have in my collection; a ½d green with inverted watermark. The SG catalogue value of £75 for mint nh and £50 for hinged would suggest it’s common enough, but I really have seen very few, and the fact that this unmounted mint example sold for £89.11 was no surprise. Definitely under valued in the SG catalogue.

And finally this piece with four ½d vermilions used abroad is cancelled by two strikes of a Malta machine cancel. Shame it’s not a cover! It sold for £43. 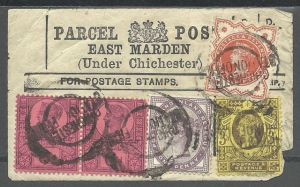 This month was a bit of a slow month for Jubilee items coming to the market. The most attractive item was this parcel label with an unusually high franking of 1s 4 1/2d which sold for £42.

This piece bearing five 5d purple & blue is cancelled by the boxed ds of the Niger Company in Akassa. All the Niger Company cancels are listed by Stanley Gibbons and priced for each stamp. In this case the catalogue value is £100 for a single stamp. It sold for £86.33.

This attractive maritime cover only received one bidder at £40…me! Featuring a block of four 1/2d vermilion and a single, they are cancelled by Glasgow cds, but also by a dotted lozenge with anchor. I’ve read something about these covers before being the work of a Captain with a philatelic eye. When I find the article I’ll be sure to post it here.

This advertising cover is from Alfred Smith, a stamp dealer in Bath and profuse publisher of advertising envelopes. This is the first time I have seen this type (the most common ones being with the “New Address” overprint. There was only one bidder at £49.99 (not me this time).

And finally this slightly soiled cover sold for £41.75 due to it’s scarce destination: Singapore!

This cover was sent from London to Barberton (South Africa) during the Boer war, and although the condition is slightly poor (as is often the case with Boer War material), the violet “MAIL SERVICE SUSPENDED” handstamp excited collectors enough to see this reach £83.87.

This wonderful parcel post piece was sent from Matlock Bath to Ilkley, before being returned to the sender. The piece not only bears both the parcel post labels of Matlock Bath and Ilkley, but also the frankings for both sendings! A very interesting item from an increasing popular philatelic subject, it sold for £135.45. 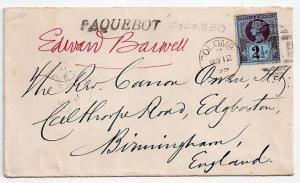 This unusual cover was posted onboard RMS Orizaba, and was put into the mail at Colombo, Ceylon, resulting in the 2 1/2d purple on blue being tied by a Colombo duplex, with “PAQUEBOT” hs alongside. It sold for £73.55.