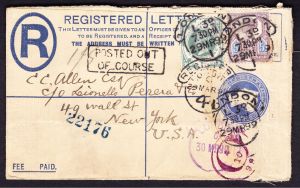 Sorry folks. To say I’m behind in my updates is an understatement… Oh well, let’s pretend that I’m not a month behind and look at the highlights of February.

First off is a scarce 1s5d franking to the USA. The 1s green is by no means common on cover, and this example is particularly attractive with the added bonus of having the “POSTED OUT / OF COURSE” handstamp. This means that the sender more than likely popped it into a postbox instead of registering it with the Post Office. Final price: £82.48

Next is an item I was hoping to get for a bargain. Those hopes evaporated quickly as bidders competed against each other seemingly every day to get their hands on this. Although not at all described, the cover features a rare and highly collectable “LATE BOX” hooded cds. This being an example of the Bradford. I believe this was applied to mail posted at a special late mail box at the train station. It fetched £227.60.

This cover was certainly the surprise of the month. Jubilee covers going to China are reasonably scarce. But I can only think that the fact this example is going to the British Legation in Peking made the difference, because the cover to China in my collection cost me about £10. Somebody paid £124.47 for this one…

Since there has been a recurring theme of parcel post labels in recent months, I thought that this single 9d on a Stockton-On-Tees parcel label was worth a mention. I think I got it at a good price: £20.35. 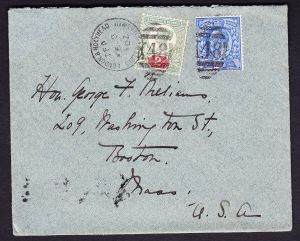 And finally another cover for the cancellation enthusiast. This cover actually peaked my interest because it’s a mixed reign franking. However on close inspection you can see that it has the rare “LONDON & HOLYHEAD / UNITED STATES MAIL” cds and matching “K48” barred numerals. Again this was not described by the vendor so I got it for a great price! Unfortunately as it was sent from America, the nasty customs people caught it on it’s way to the UK and charged me an whopping £21 on top. Meaning I paid about £90 in total. Still a good buy I think.