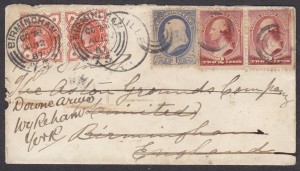 September was a good month for the Jubilees (please ignore the fact that it’s nearly November…). I was actually a little spoiled for choice! First we have a cover sent from the USA with 1883 Washington 2c pair and 1887 Franklin 1c, redirected on arrival in England with two 1887 1/2d vermilion paying the single letter rate. Not a common franking as US/Jubilee combinations are more often seen with later US issues. It sold for £70. 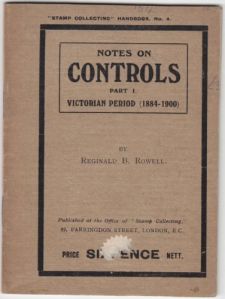 This little scarce book on the control letters on the 1881 1d lilac, 1887 1/2d vermilion and 1900 1/2d blue-green sold for £21.00. Although it won’t have any information that can’t be found in the essential Queen Victoria specialised catalogue by Stanley Gibbons, it’s still a nice addition to a Jubilee collector’s philatelic library.

Another redirected cover with mixed country franking from the same seller. This time from India. As coincidence would have it, I bought a very similar cover the same day this one finished for £25 (a bit tatty on top unfortunately but still attractive) which bore a 1a brown instead of the 1a plum which this cover features. I had already set my heart on making this a pair with mine to make an attractive page. Alas, I underbid the cover to £43.

This Zululand set with Specimen overprints sold for a very reasonable £103 in mounted mint condition. I already have this set and I paid more than that… 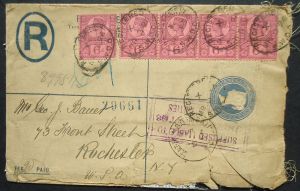 And finally we come to the only item I actually added to my collection this month. This registered envelope was sent at 12 times the UPU rate with five 6d purple on rose, plus 2d registration (as noted at the lower left) paid by the envelope. The peripheral wear and the US customs hs also indicating that something heavy was posted inside. I was very happy to add this multiple franking for £31.98.