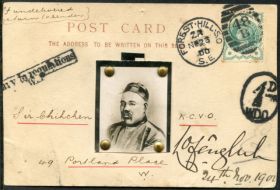 We start this month off with a curious item. The postcard was sent to Sir Chih-Chen Lofengluh, Envoy and Minister Plenipotentiary to London. The card, which depicts an image of the man was duly signed and returned in the post according to the message on the back. The sender was the infamous Reginald Bray, tester of the post office’s regulations and autograph hunter extraordinaire. Reginald Bray sent thousands of these to celebrities and politicians of the time, and the items are highly collectable. The vendor of the item didn’t know of it’s provenance, but the distinct style is obvious to those who know. Still, the item managed to fetch £77.50 despite not being described.

Another month and another inverted watermark. This time a lightly used example of the 9d dull purple and blue which sold for £341.00. It is catalogued by SG at £2’500. 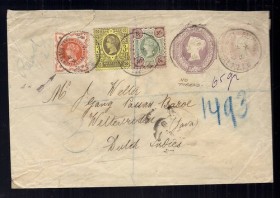 This cover is actually my favourite item of the month (and now part of my collection!). Not only is it an unusual franking in having two stamped-to-order postal stationery dies and three Jubilee values, but it is a scarce destination as it was sent to Java in the Dutch Indies (an island in Indonesia). I think it was cheap at £36.91.

Superb used examples with a central cds don’t come along too often, and I always try to snatch them up. This 1s green and carmine is one of the best I’ve seen on eBay, but only sold for £9.38 (also now part of my collection!). This must have been due to the small image supplied by the vendor and the ever so slightly faded green (which is barely noticeable in the flesh). 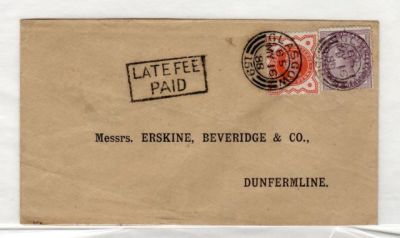 And finally we have the 1/2d vermilion paying the late fee on a cover with a nice boxed “LATE FEE / PAID” handstamp. There are many different types of Late Fee handstamp to be found. This on one cover sold for £29.10.