Since there has been several interesting, rare and spectacular Jubilee items appear on the market in the last few weeks, I thought I would start this new feature. I hope the items featured here in the upcoming months will compliment the established eBay feature with items that are too prestigious to have featured on the online marketplace. 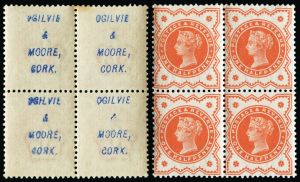 First up is a new discovery by the family of an ex-employee of Stanley Gibbons. It’s a ½d vermilion with violet “Ogilvie & Moore. Cork” underprint, previously only recorded on the 1d lilac, but soon to be included in the next Specialised Vol.1 catalogue. Unfortunately Stanley Gibbons had already sold the only two singles by the time I had contacted them, but they are currently offering this block for £2’750. 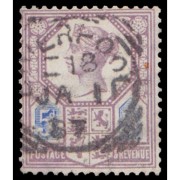 The next two items are being offered by Andrew Lajer in his Autumn 2013 list. The first is a 5d purple and blue with a FIRST DAY OF ISSUE cancel! This is the first single that I have seen (although I have also recorded one cover which was sold by Stanley Gibbons for £3’000 roughly 3 years ago). Sold for £550. 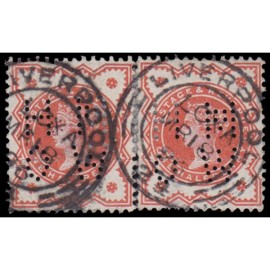 The final item is a very rare example of the Office of Works “H. M. O. W” perfin on a pair of ½d vermilions cancelled in Liverpool. It does have some faults (horizontal crease, a few short perfs and virtually separated), importantly it has an RPS certificate. The asking price is £950.