First up is an item I should have bought. It’s the type of item that I think would add very nicely to an exhibition collection as I think it would go well as the final item to complete the story. It’s a picture postcard mourning the death of Queen Victoria, with a message along side saying “Her Funeral Procession passes through London to day”, with a 1/2d blue-green on the other side dated February 2nd. It sold for £30.80. By the way, I’m also desperately looking for a Jubilee stamp used on something commemorating her Jubilee in 1887 but have yet to find it! 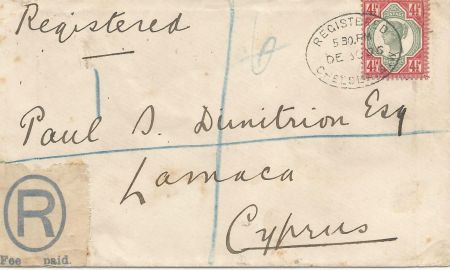 Next up is an item of destination mail (one of my favourite topics). I’ve only come across three covers with Jubilee frankings to Cyprus so far, and this is a nice (albeit slightly toned) example with a 4 1/2d paying the UPU rate plus registration.

Imprimaturs rarely come up on eBay for auction (there not uncommon in dealer’s stocks). So I was interested to see this example described as unmounted mint fetch £338.50.

This picture postcard was posted on board the RMS Columba, a paddle steamer which operated on the first leg of the “The Royal Route” from Glasgow to Ardrishaig. With the 1/2d blue-green tied by the “COLUMBA STEAMER / GREENOCK” cds. There was only one bidder but the vendor started bidding at £110. That despite the fact that it’s not in perfect condition.

Speaking of not being in perfect condition, neither is this cover. But I’m still absolutely gutted I missed it. Originally sent to the Eastern Telegraph Company in Sierra Leone, it was redirected to São Tomé(!), San Vincent in Cabo Verde (!!) and back to Sierra Leone stopping off at Madeira on the way! An truly fascinating item of postal history and an absolute snip at £34.88 :(