After another quiet summer on the Jubilee front on Ebay with not much of interest to talk about, I decided to go for a theme this month; beautiful circular datestamp (cds) strikes. Or as the Americans say, “socked on the nose” cancels. 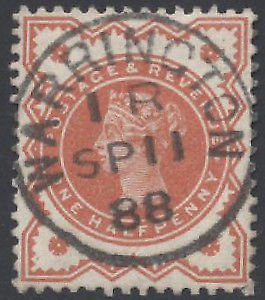 Starting with the cheapest and most abundant stamp of the set, the ½d vermilion had over 13 billion printed. So it can be a little tricky to find an example as attractive as the one shown, as it takes a lot of trawling through the many, many that still exist. So the winning bidder of this stamp paid £17 instead of doing the hard graft. That’s over 14 times the catalogue price of £1.20 in Stanley Gibbons.

The 4d green and brown is hard to find nicely used because of the fugitive ink in the green is easily affected by moisture (in fact it’s the one I’m in most need of upgrading in my collection). So any that have been soaked off will have lost some of the green to a degree. You almost have to be looking for a stamp still on piece. These two appear to have been removed carefully enough to be unaffected, and sold for £12.30 (above) and £9.81 (below) against a catalogue value of £18. 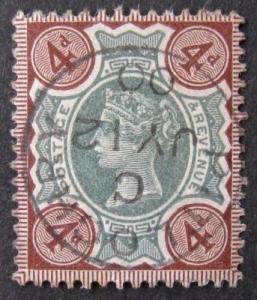 The 5d dull purple and blue doesn’t often come with a cds. I think for the most part because it was used predominantly to pay the double UPU letter rate, and often duplex cancels (with the barred oval obliterating the stamp) or squared circles (collectable in their own right but undeniably less attractive) were employed. Even with a toned perf, this example sold for £15.29. Full catalogue!

And finally the 10d, which is the highest catalogued stamp (at £45 for the standard carmine shade) in this report but paradoxically, I think, one of the easiest to find with a nice cds. So I was surprised to see this one sell for a much as £26.80 as you can get equally nice examples for around £10-15. I believe the reason that the 10d (as well as the 6d, 9d and the 1s green & carmine) is easier to find socked on the nose is because it was used more often for things such as parcel labels, telegrams and the like, which were more likely to be cancelled with a cds than regular letters.