In Grosvenor and Spink this April, the following Army Telegraphs overprinted Jubilees turned up within a week of one another. The first to come up was this impressive used block of 16 still on piece. Unfortunately it was part of a larger lot (lot 2099) with other Army Telegraph issues, so my top bid was a bit far off lot the final hammer price of £2’200. It’s the largest multiple I’ve seen by far! (The second being a block of four that sold on ebay in February). 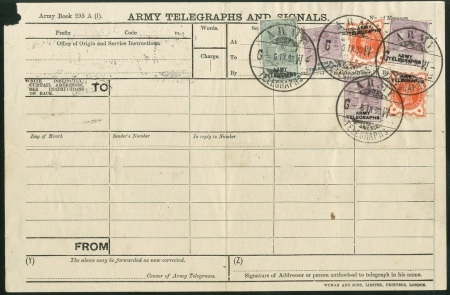 Next up was lot 2106, an unused telegram form franked with various Army Telegraph issues including two overprinted 1/2d vermilion Jubilees, which dates from when the Army was doing manoeuvres on Salisbury Plain. I was a bit closer this time with my bidding but was still beaten to the final hammer price of £380. This was the first complete and franked telegram form I have seen but I’ve heard they exist. 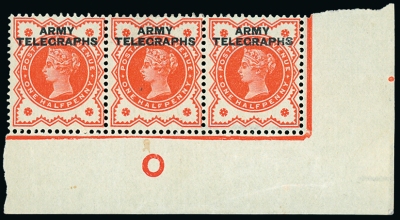 And finally Grosvenor had this mint 1/2d vermilion “O” control strip of 3, lot 137 estimated £100-150. This was one I really wanted and even used an agent for the first time to bid in the auction room on my behalf. Disappointment turned to despair as my top bid was surpassed by a measly £50 and it sold for £1’250. This is only the second I have seen (which was corroborated by a dealer I know).