June brought us some attractive and high value items (compared to the usual eBay offerings at least). First up was this advertising parcel post label from the Thorton-Pickard manufacturing company. Unusually it has a 6d stamped-to-order die and is also uprated with a 2d Jubilee. Although a little creased, it sold for a healthy £155. 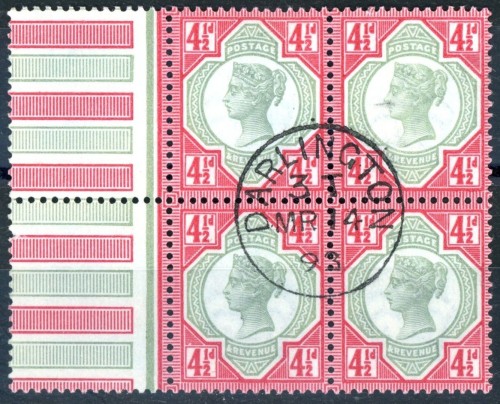 The surprise result of the week was this 4 1/2d marginal block of four with a crisp central Darlington cds (which was against the regulations as each stamp should have been cancelled individually). The green is slightly washed, but that didn’t stop this multiple fetching £217.47!

The item of the month that I missed bidding on was this scarce Mafeking 1s on 6d (with serif overprint) tied to small piece. With a RPS certificate and a catalogue value of £850 in Stanley Gibbons, it only sold for £217. Doh!

And to finish with we have a couple of incoming Boer War covers. The first with a 4d green & brown with “GONE – NO ADDRESS” handstamp struck on arrival in South Africa. It was then returned to the UK and a large “Officially Sealed” label of the Returned Letter Office was stuck on the reverse. It sold for £122.70.

And this cover was sent at the triple rate to a Prisoner of War in Pretoria. The cover was censored at the neutral United States Consul in Pretoria. Although the franking is a little tired, incoming mail to prisoners of war are very scarce, and this cover realised £164.