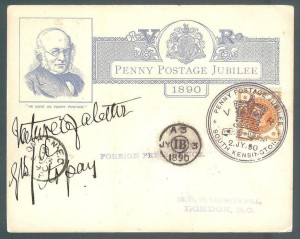 Yikes. Doesn’t time fly over Christmas… Back in November there was a few items that I would like to have added to my collection but managed to miss out on all of them for various reasons. First up is a Penny Postage Jubilee insert sent with a 1/2d vermilion and cancelled by the special South Kensington cds. Not only is it uncommon for the insert to have been used as a postcard, but the added interest here is the manuscript “Nature of a letter / 1d to pay”. I think a collector of Exhibition items would have been willing to pay more than the £37.78 it realised. 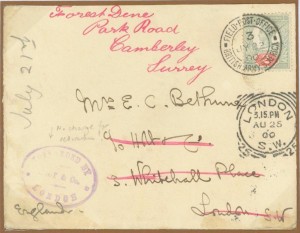 Next up is a cover sent during the Boer War with a 2d green and carmine tied by the Field Post Office British Army South Africa cds. It was sent to forwarding agents Holt & Co showing their cachet and redirected within the UK. A good buy at 18.93. 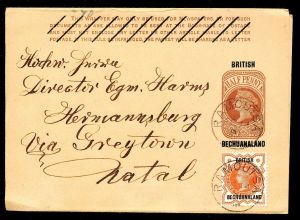 Uprated newspaper wrappers and postcards with the Bechuanaland 1/2d are reasonably common, but nevertheless this attractive example sent from Ramoutsa only sold for £30.50.

The cover below is a scarce usage of the Board of Trade departmental perfin. Strangely still not listed by Stanley Gibbons, these official stamps are particularly difficult to find on complete cover as they were often used for printed matter resulting in fronts being more easily available. I was hoping that no one would notice the perfin from the thumbnail image but alas, it sold for £128.80.

And finally we have a quite scarce single franking of the 4d green and brown paying 2d internal postage and 2d registration fee. They are much more often seen paying the foreign letter rate to South America. It sold for £11.59.

Tagged as Bechuanaland, Board of Trade, Boer War, Exhibitions, Officials