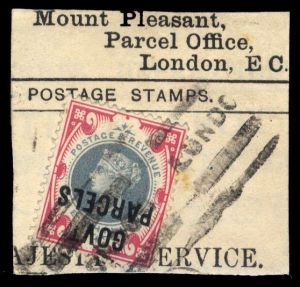 Spink will be offering part 5 of the “Lionheart” collection on June 17th, which contains the “proving piece” of the inverted overprint of the 1s green and carmine. Although several had been discovered and the variety was listed in the Stanley Gibbons catalogue, opinions changed and in 1916 it was de-listed and all examples regarded as forgeries. That was until the discovery of this example in 1950, clearly tied to a Post Office parcel label, that the Royal Philatelic Society of London granted it a certificate and it was restored to the Stanley Gibbons catalogue. The full story can be read in this extract from the L. N. Williams Encyclopaedia of Rare and Famous Stamps.