I hope that everyone who had the opportunity had a pleasant Easter holidays. We start this month off with a couple of items where I was unsuccessful bidder. First up is an 1890 Uniform Penny Postage Jubilee envelope sent to Canada, unusually uprated with a 4d and a 4 1/2d Jubilee paying three times the UPU rate plus registration fee. Apart from being an attractive franking, it has the added interested of a Canadian customs instructional label. It sold for £85.20.

Next we have a rare usage of a “Manchester Philatelic Society War Fund” charity label which I believe was to raise funds for the Boer war. It’s actually the first example I have seen on cover and it’s extra nice that it has the 1/2d vermilion and the 1/2d blue-green. It has some little faults, but I should have bid it up past the £69.50 it realised. I wouldn’t be surprised to see it in a dealer’s stock at £150+.

This interesting variety sold for only 40.62. It shows an offset, caused by freshly printed sheets being stacked on top of each other and the wet ink being pressed into the reverse of the sheet above. This is not a common variety on the 3d but would have sold for much more if a complete impression of the stamp could be seen. 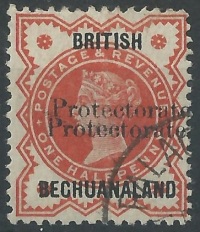 This Bechuanaland Protectorate 1/2d vermilion with double “Protectorate” overprint sold for a strong £69.95 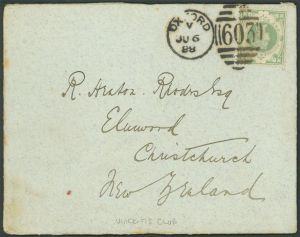