Spoilt For Choice At Spink 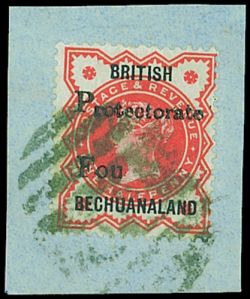 Spink’s Collector Series auction in London on 9th to 11th of July 2013 had a plethora of items of interest for the Jubilee collector. Lot 239 was a Bechuanaland Protectorate 1889 4d on ½d vermilion with “rpence” omitted. Catalogued at £6’000, the upper estimate was at full catalogue (when commission is taken into account) at £4’000-5’000. Not surprisingly it sold for less, but £3’200 hammer (or 64% of catalogue incl. commission) is still a good price. There were many other items of interest from Bechuanaland including a nice selection of covers not too often seen. 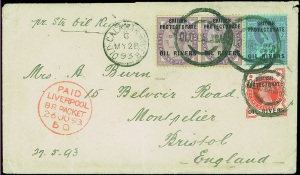 The sale also featured the “Dunrovin” collection of Niger Coast. There were many of the provisional overprints, but the highlight for me was lot 1085; a cover with a ½d vermilion, 1d lilac pair and 2 ½d purple on blue all tied by Old Calabar rubber cancels, which according to the description is the only known example of this cancel on cover. It sold for £1’400 (plus commission).