March was such a strong month for Jubilee items, that I’ve had to do a top 5 of the month! First off is this Niger Coast cover, which features three different issues. Sent registered from Opobo River, the franking pays the correct registered rate to England, and fetched £132.02

Next up is this attractive British Bechuanaland 6d purple on rose block of four cancelled with a single central Pitsani cds. The buyer snapped this up for only $37.90. If I had seen this item before it had finished I would have certainly bid more than that. Not too long afterwards, it was on Deverrell MacGregor’s website for £55, and sold very quickly.

This high franking on a parcel post label sold for £119.50. It bears a 1s green and a 4 1/2d green & carmine, both of which are scarce as singles on parcel labels, so it was no surprise it fetched a good price. Parcel labels are very collectable.

This superb Bechuanaland cover is definitely the star eBay item of the month, and probably the year. This registered envelope is franked with no less than 27 stamps worth a total of 5s!! Eight different bidders bid seventeen times to try and take this item home, and unfortunately the usual last minute bidding took the price beyond what I was willing to pay for it, and it fetched £339.50. The philatelic nature of the cover put me off bidding higher, but it is still an outstanding Jubilee and Bechuanaland cover. 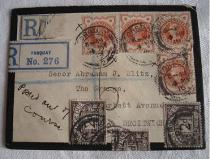 This cover definitely wins the title as “Most Unassuming Cover”, but look closer and you’ll see that it’s a little gem. Sold for a measly £4.20 (I am still kicking myself for forgetting to bid), it has been franked with four 1/2d vermilions. However, I assume that the registration label at the very top left was mistakenly applied, and was partially torn off by the sender before dropping it in the post box. The post clerk having seen this, has still assumed that the letter is intended to be sent registered. So not only is the franking insufficient, but the sending of registered letters was only allowed over the post office counter, hence the manuscript “Posted out of course” and the 6d worth of postage dues. Take another look, and you’ll notice that the stamps are cancelled in Torquay in 1916, and the post clerk has deemed them as an illegitimate franking and placed crosses next to the stamps. Hence explaining the 6d fine. A great little cover with a great story to tell.

One response to “March 2012 Ebay Report”