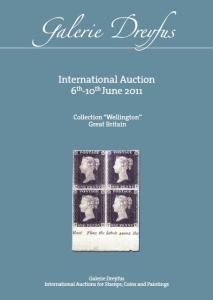 One of the largest collections of Great Britain ever to be sold in one auction went by largely unnoticed in the city of Basel in Switzerland on June 7th and 8th. Although the repercussions of this auction are still being felt throughout the GB philatelic world for all the wrong reasons. Hosted by Galerie Dreyfus, several significant items (and unfortunately several significantly dodgy items) in British philately went up for sale as only 10 or so people filled the room to bid on an estimated €4’000’000 worth of material. This of course made me very optimistic about snapping up some bargains when the few Jubilee issue items came up for sale.

The first of which was an cover sent insured bearing a 3d Jubilee and an 1883-84 2s6d (which is rare on cover). Although there was some toning, it went unsold at €150. The next item was another cover with an 1883-84 2s6d as well as a 1/2d green on a large envelope going to the USA. Unfortunately I was outbid and it was knocked down for €280. The next interesting lot was a comical hand illustrated cover bearing a 2 1/2d. Although no where near as beautifully painted as the covers from the King Harmann correspondence for example, this one had its charms (and some peripheral tears) and was sold for €320.

Next up were two very much undervalued covers. Both had 2 1/2d frankings with the Board of Trade “(crown) / B.T.” perfin. The first was on a OHMS envelope (slightly trimmed at one side) and sold for €200. The next was a much more attractive example, which I am now the proud owner of. It was on a printed Board of Trade wrapper with embossed logo going to Bankok, and it was mine for only €260. I have seen fewer than 5 of these on cover (there are some on fronts) and this was by far and away the best example.

Also of note was a 5d with Office of Works overprint in mint and used, a mint block of four 1s green & carmine with Government Parcels overprint and two mint 1s green and carmine with Board of Education overprint. The next lot I bid on was a mouring envelope written by Queen Victoria to her daughter in Athens (she had married the Prince of Greece). Franked with a 2 1/2d which was tied by a scarce London hooded “V.R.” cds and had a beautiful black Royal wax seal on the reverse. I was outbid for €200.

But the next two lots I was more fortunate with. The first was a large parcel piece sent from South Africa during the Boer War. Only last month a very similar item had sold on ebay for £178.45, but this one was franked with a block of six plus a single 2d green & carmine, two 1/2d oranges and a 1s green & carmine!! I was expecting a fight with an estimate of only €150…but I was the only bidder!!

The final lot is, I’m beginning to realise, the that one I’m most happy with. Put at the end of the Queen Victoria section with the subheading “RAILWAY STAMPS” and no picture, it was pure luck that I came across this lot. A group of four covers, with the main item of interest (for me at least) being a 10d purple & carmine on an express cover with a red 2d Metropolitan Railway stamp. The railway stamp was used to send the cover from Pinner to Baker Street Station in London, before being sent to The Strand with the 10d. With three other non-Jubilee covers in the lot, my only competitor was a dealer, and I think this was a steal at €320.

Note that prices do not include the 20% buyer’s commission

One response to ““Wellington” collection goes by mostly unnoticed”