<< Back to Mafeking Catalogue Listing

There are only four known examples of this stamp. The first was only discovered in 2003 after one was sent to the British Philatelic Association (BPA) as a normal 2s on 1s green with sans serif overprint. They concluded that it was indeed genuine but state in their certificate that it is of “undertermined status.”

Following its discovery it was decided to seek further opinions and was sent to two leading students in the field of Mafeking Siege Stamps and Boer War philately. One of these specialists provided information that another example was offered in Auction in 1970 as a normal and also has a April 1900 cancel. The second consultant agreed it was genuine but probably an essay. This could be correct as the British Bechuanaland 4d was surcharged 1s with both types of font as a double surcharge. This is a known practice of some jobbing printers of that era deliberately overprinting a subject twice with either different type or different inks.

The fourth example was discovered by me in 2020 in a collection from South Africa that David Feldman received on consignment, and gained a BPA certificate in February 2021.

Below are the four known examples:

This is the first example that was discovered with the type 1 surcharge, after being sent to the BPA in 2004 for certification, which is tied to piece by a Mafeking cds, cert. BPA (2004) 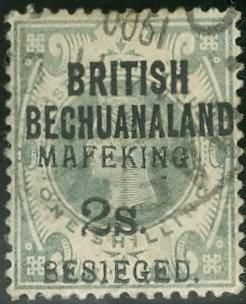 History: Currently for sale on David Brandon’s website, P.O.R; For sale by Filat.ch (Richard Johnson) for CHF42’250 in April 2020

Some toning, but good colour and appearance, cert. BPA (2011) (as described by Stanley Gibbons)

Mafeking April 3 1900 cds, small corner crease at lower left and a little discolouration, the 4th example to be discovered which was found in a collection by Ricky Verra (me!) at David Feldman SA in 2020, cert. BPA (2021)